Highlights from Day 1 of the LPGA convention:

Opening Keynote:
The heroic and humble Catherine Bernard of Spartacus Legal Foundation opened our convention by recounting her legal battles against state overreach. Catherine has gained national attention by persuading Georgia jurors to nullify charges for victimless crimes, effectively acquitting victims of the doomed War on Drugs. With inspiring stories of rights restored, odds defied, and justice reclaimed, Catherine reminded us what it at stake. Every law, however well-intentioned, leaves for the rest of us less freedom and more danger of violence. For the relatively poor and powerless, abuse of state power is a daily reality which must be actively resisted by lovers of liberty. 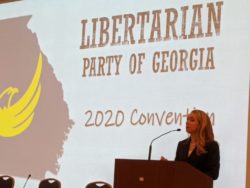 Ballot Access Panel:
Hosted by state Chair Ryan Graham and featuring recent libertarian candidates Jay Strickland and Demond Kennedy, discussed ballot access – what it takes to get a candidate on the ballot in Georgia. Amid the worst ballot access laws in the country, these intrepid candidates went door to door collecting signatures and fruitlessly seeking the permission of Republicans and Democrats to challenge them at the polls. Bryan Sells, champion of our ongoing lawsuit against the Georgia Secretary of State, offered legal framework for challenging this law and other unfair restrictions on Georgia voters’ choices. 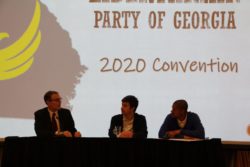 Alternatives to State Run Education:
Even if publicly funded education is a social good, federally subsidized and controlled education has been an unequivocal disaster. Public schools suck up more money every year while consistently failing those young people most in need and further entrenching social inequalities. All three panelists are experienced teachers who chose an alternative path for their own children, and want to help others do the same.  Dan Sanchez of the Foundation for Economic Education and Praxis bootcamp advocated for unschooling children to maximize their chances at a productive, engaged life.  Dr. Laura Williams, who has taught in both accessible public and elite private universities, elaborated on government-run schools’ primary purpose: to teach compliance and conformity.  Bryan Pengie of Homesteads and Homeschools shared his experiences customizing curriculum for his own children, including adopted children with special educational needs. In 2020, the Libertarian Party of Georgia will foreground the issue of school choice and increased access to alternative, non-state education. LP Georgia Communications Director Stephanie Aylworth moderated.

Communicating Liberty:
Libertarians face conflicting criticisms of our messaging: both too extreme and too moderate, both too complex and oversimplified. Our Vice Chair asked a handful of Georgia’s most committed communicators of liberty to explain their strategies. Peter R. Quinones is managing editor of the Libertarian Institute and hosts the Free Man Beyond the Wall podcast and is currently co-producing a documentary entitled, “The Monopoly on Violence,” which is scheduled for a 2020 release. He maintains that the ideas of individual liberty are inherently radical, and we should make no apologies in promoting them aggressively. Banks Wise is the co-host of the Georgia-based Rebellion podcast, and believes that kindness and empathy are the core values of libertarianism, and should ground our outreach to others who don’t yet agree. Joshua Smith, national delegate-at-large for the Libertarian Party, promoted active listening as a strategy both for building the party and strengthening it from within.

Presidential Debates:
Jessica Szilagyi of All On Georgia.com moderated our presidential debate. Ten candidates took the stage to discuss the most pressing issues facing the nation, with an eye to earning Georgia’s delegates for the national libertarian nomination. Check out our further coverage of each candidates’ remarks.  HD clips will be available soon. 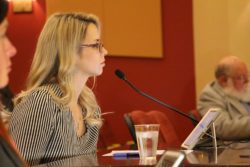 Members Meet and Greet at Sweet Southern Ice Cream Shop
Libertarians let their hair down with buckets of beer and plans for the future. Presidential candidates mingled with our guest speakers, students, and party members, eagerly awaiting the winner of our bean-based straw poll (now that straws are illegal in some places). Adam Kokesh was a clear winner of the informal polling with 48 votes. Strong showings by Jo Jorgensen (29 votes), Vermin Supreme (26 votes), Dan Behrman (21 votes), and Sam Robb (20 votes) were also recorded. Adult beverages for the event were generously donated by Mac’s Midtown. 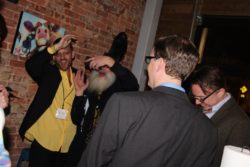